A Life In The Ocean

Come rain or shine Mark Tozer happily walks his part of the South Australian coast every morning, taking in his daily dose of appreciation for his marine backyard.  This passion for the ocean began when he was a young kid growing up in the suburb of Birkenhead, South Australia. He loved nothing more than frequenting the local beaches at Semaphore, spending almost every weekend with his dad snorkeling, inspecting the seagrass and marine life. 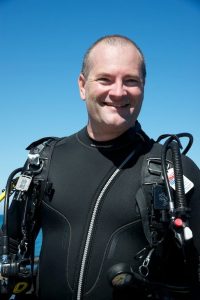 Outside of his appetite for diving and the ocean Mark generously shares his life as an owner/operator of a large commercial furniture factory in Lonsdale and iconic retail furniture store in Mile End, employing over 60 South Australians.  While away from work and water, Mark spends his time working with the charity he established in 2013, Dive for Cancer.  This charity has now grown across several Australian states and beyond our shores, including New Zealand, Sweden, and Belgium. All charity funds that have been raised over the last 9 years has been awarded to the Cancer Council SA (South Australia) in the aid of continuing the fight against cancer.

Since commencing diving in 1987 Mark has logged over 5000 dives and accrued over 25 different scuba diving certifications.  He began diving at Adelaide Skin Diving Centre with FAUI (Federation of Australian Underwater Instructors) moving on to NASDS (National Association of Scuba Diving Schools) in 1991, crossing over to PADI (Professional Association of Diving Instructors) in 2010 due to the growing community and ease of dive travel.

Mark completed a 4 year apprenticeship as a cabinetmaker before being accepted into Charles Darwin University in 1991 to study Building Design and Engineering, Mark made the decision to migrate to the Northern Territory where he took every opportunity to carry out hundreds of explorative dives in and around the Darwin Harbour.  These fascinating dives developed into a passion for exploring the numerous WWII ship and plane wrecks in the area and countless wrecks from the aftermath of Cyclone Tracey in December 1974.

Over the years his appetite for the ocean world extended beyond our Australian shores, journeying to multiple exotic locations like the Solomon Islands, Micronesia, Palau and Santo continuing his interest historical deep-water wrecks. But for Mark Tozer no dive can beat his favourite locations; Truk Lagoon 1800 kilometres north-east of New Guinea where currently around 50 wrecks can be found from the devastating Operation Hailstone from the U.S Navy bombardment on the once held Japanese Position in WWII.  And the SS President Coolidge in Vanuatu, an American luxury steam ship which sunk upon hitting US mines with 5000 troops aboard.  Although loving to dive in these iconic locations you will likely find him most weekends diving his resident favourite the local South Australian, AKA “The Dredge”.

A deep fascination of sharks began after reading the story of the USS Indianapolis, where it is recorded that over 600 American sailors lost their lives in the deadliest shark attack in history.  This led Mark to strike up a conversation and lifelong friendship with South Australian icon Mr Rodney Fox, Great White shark attack survivor, film maker and marine conservationist.

Being a close friend of Rodney and Kay Fox for over 30 years, the trio would spend hours catching up to chat about all things’ ocean and conservation which lead to partnering with Andrew Fox (Son of Rodney and Kay) and Rodney Fox Shark Expeditions. Together Mark and Andrew run the business with the aim to encourage others in the appreciation and understanding of great white sharks through research and education.

This direction of shark and marine education spurred on the partners’ next project with the company’s new museum and learning centre only minutes from Adelaide’s inner city.   The centre holds some integral messages to assist people in understanding the essential role of sharks in our ecosystem and our marine environment, encouraging people from all walks of life to gain a clearer understanding of man’s effect on the ocean.

In 2022 Mark had the honour of becoming a Director of the research and conservation organisation Sharks and Rays Australia. SARA’S conservation goals are based on sound science, public outreach and working with local stakeholders. SARA was formed with the aim to not just produce science in the ‘ivory tower’ but to involve the general public in our sawfish and shark research expeditions.

As Mark has had almost a 50 year love affair with the ocean its no surprise he is he is also the Master of ceremonies at OzTec. A major international event that, since its inception in 1999, has done more to highlight the adventure and excitement inherent in diving than any other show. OZTek Advanced Diving Conference & OZDive Expo– continues to play a key role in creating broad awareness of new techniques and technologies which transform and push back the boundaries of underwater knowledge.

Mark is a natural collector of items, and his collection of historical diving equipment and memorabilia is no exception.  An abundance of these items is on display in the museum and learning centre in the hope of helping further educating those into the world of the ocean and great white sharks.

Leading by example for the next generation Mark’s son Harrison Tozer has now followed in his father’s wet finned footprints.  Harrison has found his own deep-seated love for the ocean and passionately works onboard the MV Rodney Fox helping guests to get once in a lifetime, up close and personal view of sharks in their natural habitat. 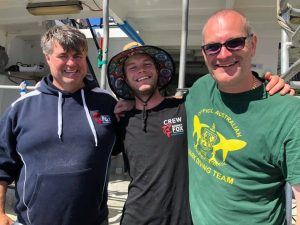 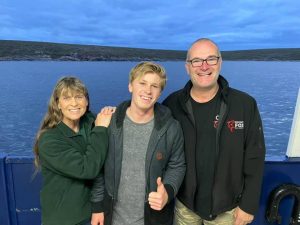 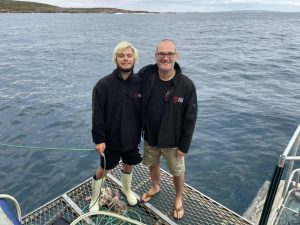